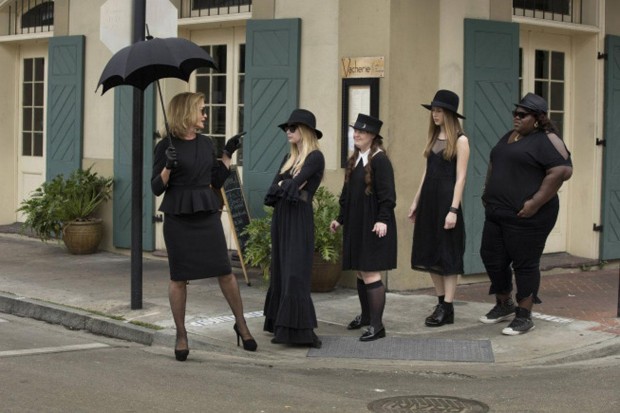 FX has released new American Horror Story teaser trailer for the fourth episode of its show which is titled Fearful Pranks Ensue. Here’s the official synopsis for the episode: 1961: When an African American teenager is lynched, Marie Laveau, who has no faith in the Civil Rights Movement, takes a ghastly revenge. Today: Queenie has been horribly violated and terribly injured, and Fiona blames Marie. She won’t send Queenie to a hospital; they’ll take care of her themselves to avoid attracting attention… and the wrath of the Council of Witchcraft. But Fiona does send Marie a bloody message… one that will rattle the decades-long truce between the Salem witches and the Voodoo Queen. Meanwhile, Zoe tends to a traumatized Kyle, but when he runs away, she must find him before he can do any more harm. And Madame LaLaurie is worried, because today is Halloween – the day that fearful pranks ensue if the proper offerings are not made. As Fiona scoffs at her superstitions, an enraged Marie prepares for a terrible payback, and a humbled Madame LaLaurie finds herself indebted to Queenie. Myrtle, Quentin and Pembroke, three representatives from the Council of Witchcraft, come to pay a visit; unaware of Queenie’s condition or the violation of the truce with Marie, they come on far graver business – business that could be bad news for Fiona. Myrtle has had dire suspicions about Fiona for a very, very long time. But both Spalding and Cordelia have secrets that will impact the Council’s investigation. Elsewhere, we learn that Hank, too, has a secret. And as Halloween night falls, a terrifying army is raised, the girls go out to search for a missing friend, and Spalding hosts a ghastly tea party. American Horror Story: Coven teaser 3.04 Fearful Pranks Ensue airs October 30th.
Category TV Series Tags :
AMERICAN HORROR STORY Season 3