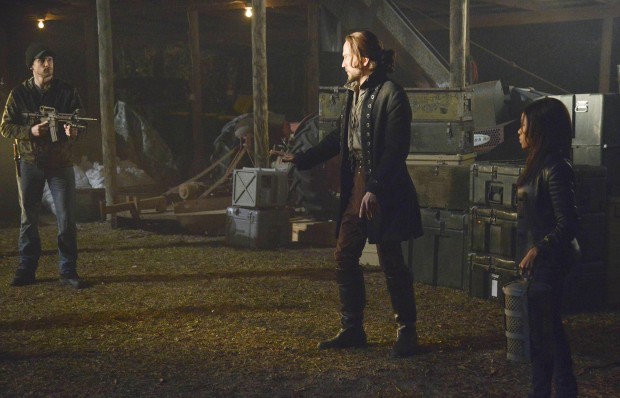 Ok, it’s time for new Ichabod Crane’s adventures which means it’s time for teaser trailers for the next episode of Sleepy Hollow. You can also check out the photos from this episode titled The Vessel. So, in the eleventh episode, Captain Iriving’s daughter, Macey, becomes the target of evil forces, he makes a desperate plea to Crane and Mills for help, and seeks answers that lie within Washington’s Bible. Meanwhile, a frightening chapter of Jenny’s past is revealed. And here’s the official synopsis for Sleepy Hollow, The Vessel:

Ancitif, a minion of Moloch with the ability to jump from body to body and possess its victims via physical contact, returns to Sleepy Hollow after a seven year absence and delivers a foreboding warning to Captain Irving: unless he delivers George Washington’s Bible – a valuable resource in the war against Moloch – great harm will befall his daughter, Macey. Unwilling to cede to the demon’s demand, Ichabod and Abbie search Sheriff Corbin’s archives for clues to defeat their latest adversary, and make a startling discovery about the identity of one of the demon’s past victims. Even as Ichabod and Abbie uncover the key to defeating Ancitif, they find themselves in a race against time as they try to obtain a relic fundamental to accomplishing their task. Meanwhile, Captain Irving takes steps of his own to safeguard his family, but his precautions may prove to be in vain when the slippery demon manages to infiltrate the ranks of the Sleepy Hollow police department, and Jenny makes a revealing confession about her past that could strengthen her relationship with Abbie.