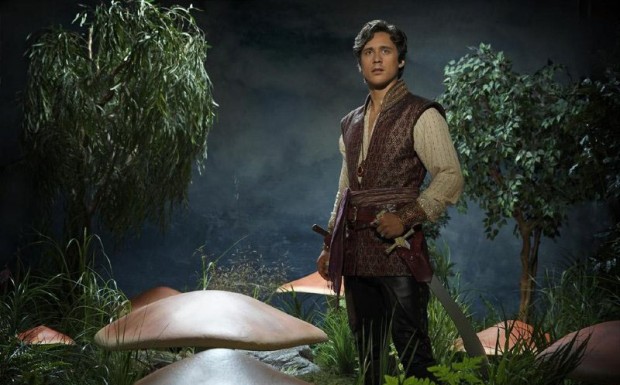 ABC has released new extended teaser trailer for its upcoming TV show Once Upon a Time in Wonderland which airs October 10. In the series premiere episode, Down the Rabbit Hole, Alice returns home to her father telling her that everyone thought she was dead.

Her imaginative stories about a talking White Rabbit and a mystical place called Wonderland end up getting her admitted into an asylum where Dr. Lydgate convinces her to have a procedure that will allow her to forget her pain. Right before the operation is set to take place she is rescued by the Knave of Hearts who takes her to the rabbit who informs her that her true love Cyrus is still alive. As the trio then jumps into the portal returning to Wonderland, Alice sets out on a quest to find him but the villainous Jafar and the Red Queen have other plans for her.

Sophie Lowe stars as Alice, Michael Socha as Knave of Hearts, Peter Gadiot as Cyrus, Emma Rigby as The Red Queen with Naveen Andrews as Jafar and John Lithgow as the voice of the White Rabbit. Guest starring are Jonny Coyne as Dr. Lydgate, Iggy Pop as the voice of the Caterpillar, Jessy Schram as Ashley Boyd/Cinderella and Lee Arenberg as Leroy/Grumpy, Millie Brown as Young Alice, Shaun Smyth as Alice’s father, Matty Finochio as Tweedledee, Ben Cotton as Tweedledum, Ryan Elm as Doctor, Michael Q. Adams as Doctor #2 and Keith David as the voice of the Cheshire Cat. Down the Rabbit Hole written by Edward Kitsis and Adam Horowitz, Zack Estrin, Jane Espenson and directed by Ralph Hemecker is set to premiere Thursday, October 10 (8:00-9:00 p.m., ET) on the ABC Television Network.
Category TV Series Tags :
Once Upon A Time In Wonderland