Walt Disney Pictures has finally revealed the first teaser trailer for Planes: Fire & Rescue, which opens next July. The movie features a quirky crew of elite firefighting aircraft devoted to protecting historic Piston Peak National Park from a raging wildfire, and as you’re about to see in this (short) video – the whole thing looks pretty cool…

Directed by Bobs Gannaway, the sequel to Disney’s animated hit Planes, once again stars Dane Cook as Dusty, who (this time) leaves the glory of the racing world behind to lend a wing to some courageous airborne fire-fighters.

In other words, Dusty learns what it takes to become a true hero, and that looks like this:

Or, if you prefer more details:

When world famous air racer Dusty learns that his engine is damaged and he may never race again, he must shift gears and is launched into the world of wildfire air attack. Dusty joins forces with veteran fire and rescue helicopter Blade Ranger and his courageous air attack team, including spirited super scooper Lil Dipper, heavy-lift helicopter Windlifter, ex-military transport Cabbie and a lively bunch of brave all-terrain vehicles known as The Smokejumpers.

Beside Cook, the rest of Planes: Fire & Rescue cast includes Julie Bowen as the voice of Lil Dipper, and as we said – the movie is set to hit theaters on July 18th, 2014. 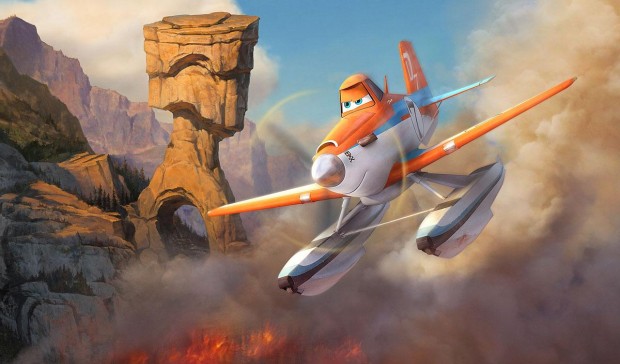 PREVIOUS ARTICLE
Check Out: 5 New THE HOBBIT: THE DESOLATION OF SMAUG Posters
NEXT ARTICLE
Tommy Wirkola To Direct, Noomi Rapace To Star In Sci-Fi Drama WHAT HAPPENED TO MONDAY?