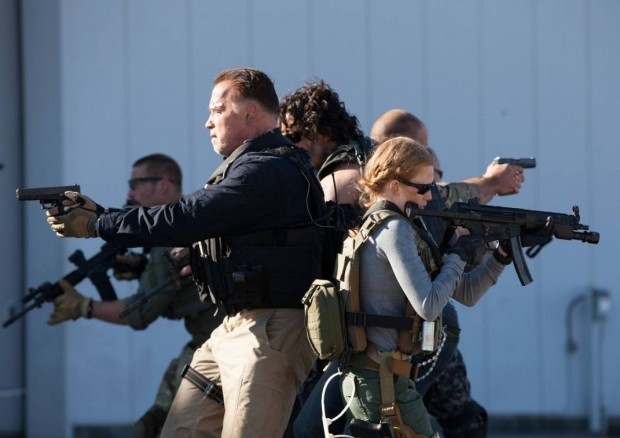 Good news for all Schwarzenegger’s fans out there – a brand new red band trailer for his upcoming action thriller Sabotage arrives tomorrow! And, as you already see from our title, today we’re here to give you the very first look at that video. Pretty short, but an action-packed teaser, head inside to check it out… Directed by David Ayer, written by Skip Woods and starring Arnold Schwarzenegger in a leading role, the movie revolves around members of an elite DEA task force who find themselves being taken down one by one after they rob a drug cartel safe house. In other words, Arnie plays the commander of an elite squad of DEA operatives named John “Breacher” Wharton, while the rest of the cast includes Olivia Williams, Mireille Enos, Sam Worthington, Harold Perrineau, Terrence Howard, Joe Manganiello, Max Martini and Josh Holloway. When the team successfully executes a high-stakes raid on a cartel safe house, they think their work is done – until, one-by-one, the ten members mysteriously start to be eliminated. Sabotage is set to hit theaters on March 28th, 2014. Let us know what you think about this teaser & stay tuned for the full trailer!
Category Movie Trailers Tags :
Featured NewsSabotage